The quiet path to world-leadership 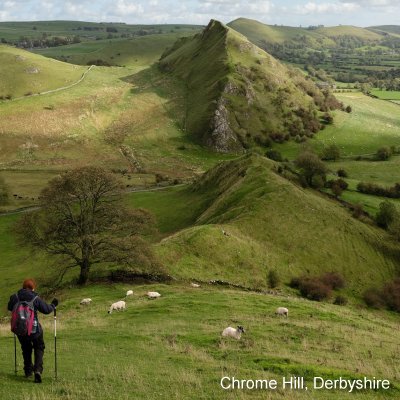 How did a small company, based where the Industrial Revolution started in Derbyshire over 250 years ago, come to dominate the world-wide market for domestic clay shooting simulators?

We have only ourselves to blame if you are a clay shooter and you haven't heard of DryFire - we must do better with our marketing!

DryFire improves scores, no doubt about it, in fact DryFire's Dallas-based US distributor guarantees it and world champions. swear by it!

DryFire was invented in 2001 and the latest version of the system uses a dual head simulator with Version 5 of the software for Windows 10 PCs and Apple MACs. 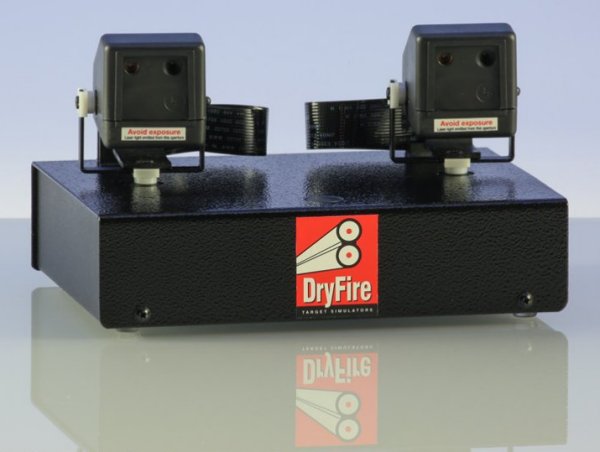 The start of it all

Wordcraft International is one of those companies with a stack of technological firsts to its name but its founders never had any desire to grow into a mega-corporation. Working with much larger partners throughout the world meant that Wordcraft could remain small, a place where everyone knows everyone and where the pressures of the rat-race are left outside the door.

In 2001 Mike Lake, one of the founders, retired from running Wordcraft and decided to try clay shooting. As a life-long shooter, "everything from air rifles to Boffers guns with some .303, .308 and Lapua 6.5x47 F Class thrown in", Mike found clay targets annoying: "the little beggars moved!"

Returning home from his first shoot, deeply depressed by 18/25 at Skeet, Mike felt there had to be a way to get intensive practice without laying out megabucks in clays and cartridges. While waiting for his shotgun certificate to come through he came up with the ideas that led to DryFire - a system that not only generates targets exactly the same as those at the shooting ground, but also tells you, to the nearest fraction of an inch, where the centre of your shot pattern went in relation to the clay.

Shooting in the UK

Most people don't realise that we in the UK have "a right to bear arms". As a society we have decided not to permit automatic weapons, semi-automatic rifles above .22LR or hand guns other than black powder.

So, as long as you are a UK citizen, have a good reason (target or game shooting), are of sound mind and can provide secure storage for guns and ammunition, you should have no problem getting a shotgun certificate in the UK. Getting a firearms certificate for a small bore or full bore rifle takes a little longer but, as long as you have good reason, it isn't too difficult.

It's worth remembering that we have some of the world's finest gun makers here in the UK.

Admittedly our media is pretty ill-informed about shooting (most journalists confuse shotguns with rifles and don't know the difference between a pistol and a revolver) but on the whole the balance seems about right and we need to project a positive image of our sport, particularly to young people.

"Developing DryFire was fun," says Mike, "I didn't have the pressure of day-to-day work, I had some knowledgeable friends and the process from prototype to useable product was incredibly fast - even though I hadn't written any software myself for almost 20 years!" Mike is the first to admit that his early code was not up to the standard now found in Version 5 - written by professionals!

The first prototype wasn't very pretty - PCB, bent aluminium and balsa wood! There was plenty of balsa wood around because Mike had been building and crashing RC model aircraft for years. 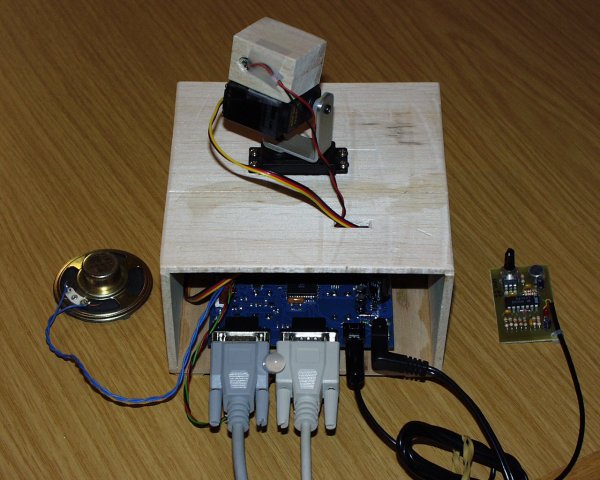 In fact. making the system work, for any type of target, using any type of gun, with any type of cartridge, in any type of room, involved some very serious maths. Mike commissioned the local University to do the sums but they gave up claiming "it's too complicated" and still charged him a fee!

Fortunately Mike knew some smart people, including one of his colleagues at Wordcraft and a friend at the Rolls Royce Aero Engine Division in Derby, so the problem got sorted.

Mike's original intention was to practise gun movement only, in the same way that Swing allows you to, but an electronics consultant who made the first PCB suggested using a digital image sensor (camera!) to spot a beam of infrared light bounced off the wall. This added another layer of complex mathematics and calibration - but, again, it worked!

"I needed something to practise clay shooting using my own gun, in my own home, to become familiar with the widest possible range of disciplines in trap, skeet and sporting and I wanted to know exactly where my shot went while building the muscle memory and concentration skills necessary to transfer to the shooting ground - and it worked!"

In the late 1970s Wordcraft invented and named "dongles", originally developed to protect the Wordcraft word processing software running on a Commodore PET computer. Dongle production ended up in the hands of Brian Edmundson and he took over the electronics and hardware development side of DryFire. Over the years both Brian and Mike have become dab-hands at using 3D CAD software to develop lots of things besides DryFire.

Blasts from the past

The first production DryFire version had a space-age dome on top - soon abandoned! 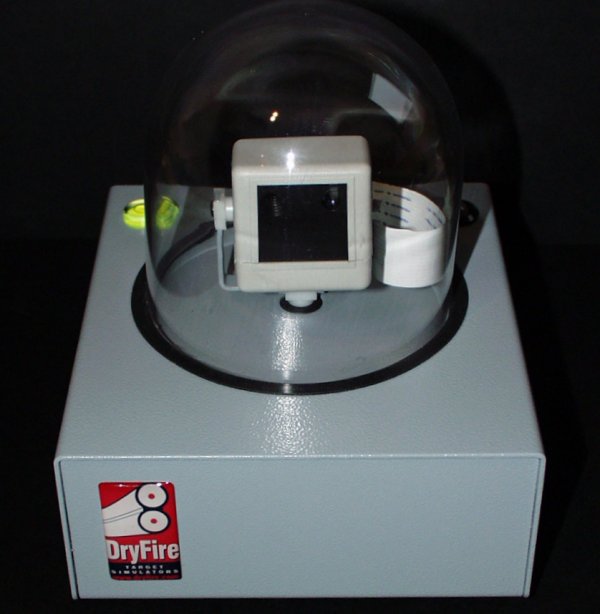 The first batch of space-age enclosures: 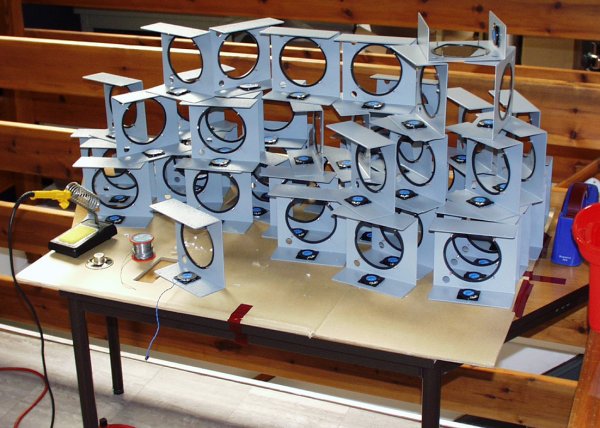 There is no point doing something if you don't go completely over the top!

Mike got carried away and the photo below shows the space-age enclosure and a remote hand control. The remote was designed for use with a smartcard so shooting grounds could set up a system and charge for its use. The idea got dropped!

The little red box is part of the gun assembly which detects when the trigger is pressed (via the short cable shown bottom right) and sends out a pulse of infrared light through the "dummy" (bottom left) inserted into the muzzle of the shotgun. The red box and the dummy have now been replaced by the Universal Gun Assembly (UGA).

The trigger switch was tricky - mainly because triggers come in different shapes and some people have them hard back against the trigger guard while others have them further forward. The answer came from Colin Robinson, a colleague of Brian's, who, over a cup of tea, suddenly said "a tree tie" - something wrapped round the trigger with a switch moulded into it. Colin is a brilliant toolmaker and he also had some injection moulding machines so the DryFire trigger switch came into existence. 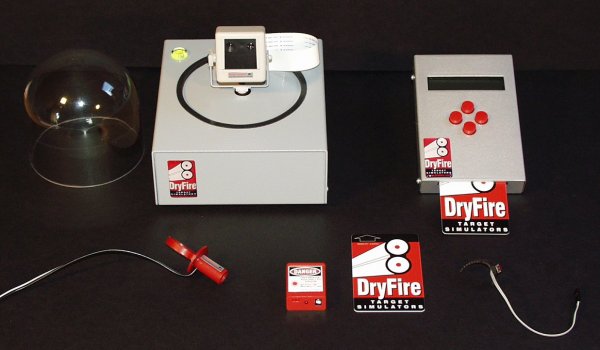 Early systems had only a single head so they couldn't show both doubles targets simultaneously. Instead the first clay of a pair was displayed and, as soon as a shot was taken, the system showed the remaining path of the second clay.

The first dual head version allowed both targets to be shown at the same time. 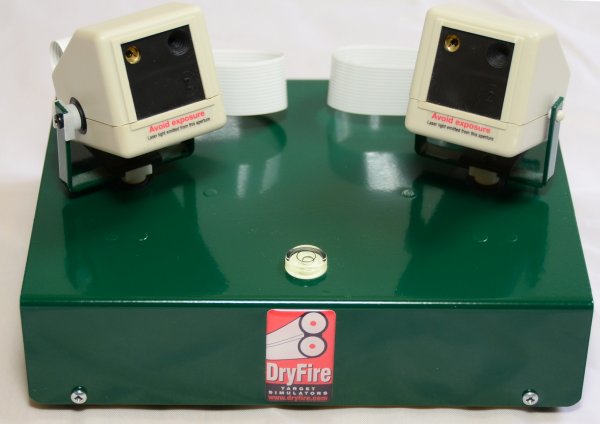