The point where the centre of the shot string is in relation to the aim point at a specified distance.

Pointing a gun and pulling the trigger doesn't help if you have no idea where the bullet or pellets will go.

With a rifle you can adjust the sights to compensate for the fall of a bullet over distance.

With a shotgun we don't have "sights" and we don't "aim", we "point". Our concentration must be on the target, not on the end of the barrel and certainly not on the bead.

What's the point of the bead?

Some shotguns have two beads, one near the breech, or part way along the barrel, and one at the muzzle. What are they for? Are we supposed to line them up like using a rifle?

It is tempting to file them off - but that would spoil the look of a nice gun. Best just to ignore them.

If anyone reading this page works for Beretta, Browning or any of the other shotgun manufacturers, perhaps you could let us know what you think the bead is for.

Shotgun shooting is about "gun awareness" - the gun becomes part of you, like driving a car or riding a bike - and that takes time and practice. We don't consciously "aim" but we have a "sight picture" as we look along the rib. Over time, if our gun mount is consistent, this sight picture becomes intuitive so we can forget about it and concentrate on the target. The moment our eyes are brought back to focus on the end of the barrel (or, even worse, the bead!) we are in trouble and we will miss, usually low and behind.

Some people claim to find the bead helpful in acquiring the correct sight picture, some go to the lengths of having coloured plastic beads added to the end of the barrel. Some manufacturers encourage this behaviour by providing screw-in mounts for beads! Some people believe a larger bead helps overcome problems with eye dominance - in our opinion, they are wrong - see below.

However, the bead, like the rib and the end of the barrel, must be seen in our peripheral vision when shooting, while our focus must remain on the target. George Digweed, one of the greatest clay shooters of all time, famously said there are three important things in clay shooting: "the target, the target and the target".

You don't need fancy gizmos on your gun, nor do you need an expensive gun (George Digwood would probably be just as good with a Baikal as with a Perazzi), you just have to be a damn good shot - and that comes with some natural ability, a good coach and lots of practice - which DryFire can provide.

So, where is our gun pointing?

Different guns point at different places. Some point straight ahead of the rib line, some point higher.

Sporting guns tend to shoot "flat" with about half of the pellets above and half below the point of aim. This is because sporting targets can be unpredictable

Trap guns tend to point higher to put the majority of pellets higher than the point of aim - at a specific distance. This is because trap targets are rising and we want the clay to fly into the shot pattern. 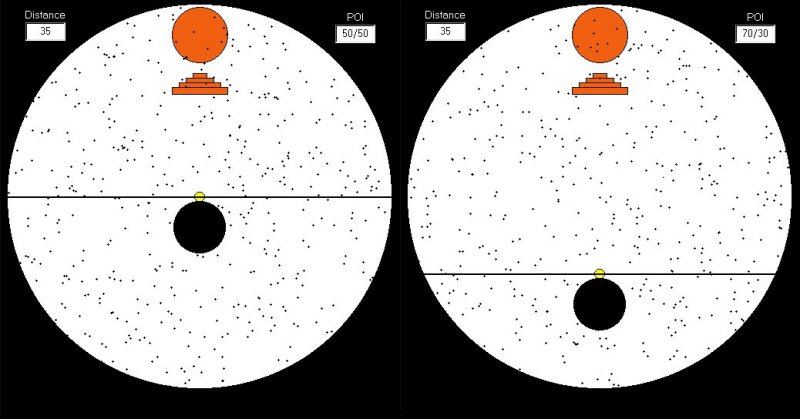 The diagram above shows 30" circles enclosing about 90% of the pellets at 35 yards.

The black circle with yellow bead (!) shows the point of aim. The clay is shown to scale: flat-on and edge-on.

The Teague Chokes web site has an excellent page on patterning.

The sketch below shows a simple pattern plate. 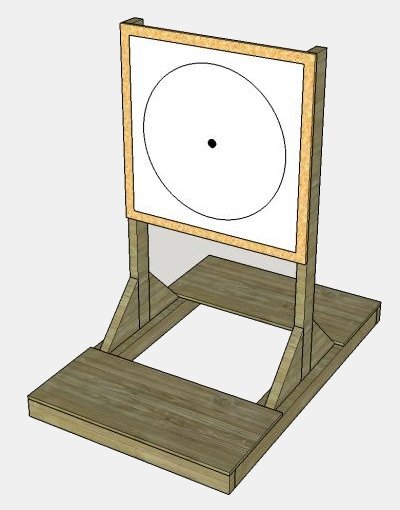 Many shooting grounds have a pattern plate to check point of aim. The sketch shows one with timber for the supports and replaceable chip board or MDF to hold the target. The centre of the board should be at the height of the average shooter when in the shooting position Obviously there needs to be a safe area behind the pattern board - rising ground or lots of space!

Using one is simple:

Point of Impact in DryFire

DryFire allows you to enter your POI as a percentage - you specify the first percentage as measured on the pattern plate, e.g. "70" for a 70/30 gun.

Alternatively you can enter how far the centre of your shot pattern is above your point of aim. You can do this by eye on the pattern plate. 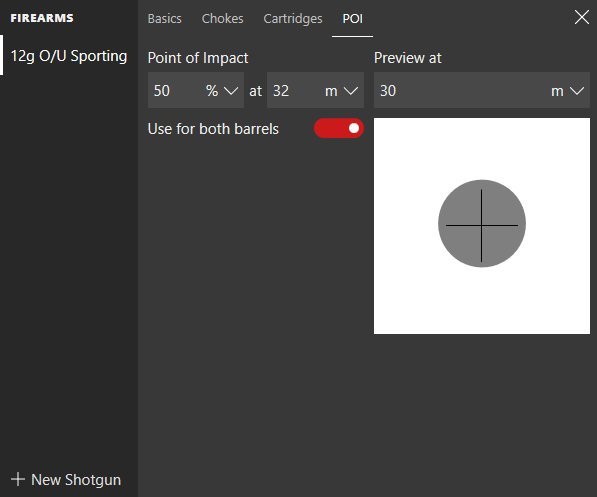 It is worth checking POI for each barrel. In almost all cases it will be the same for both but there are a few guns where the POI is different - the second barrel shooting higher than the first because the target will be further away! DryFire allows you to enter separate POIs for each barrel if necessary.