Anyone with a shotgun licence wishing to use Indoor Clay Targets for practice or coaching may bring their own shotgun - if permitted by the venue.

However, most people won't have their own shotgun so a safe alternative is required.

ILS is not a shotun!

ILS is not a "shotgun"

The ILS is designed specifically for use with Indoor Clay Targets with the aim of bringing more people, especially young people, into the sport - not to compete with the beautiful shotguns made by the likes of Perazzi, Krieghoff, Beretta, Guerini, Blaser, Browning, Miroku etc..

A work in progress

We are actively working on the design of the ILS.

We don't have a monopoly on ideas and we welcome positive and creative suggestions from anyone. Please contact us at the email:

Can we learn from the small-bore world?

The .22LR small-bore and air rifle worlds moved towards "anatomical" rifles many years ago and found that such guns were far more attractive to younger shooters than the traditional all wood and steel models. People liked the modern look and the ability to adjust almost everything. 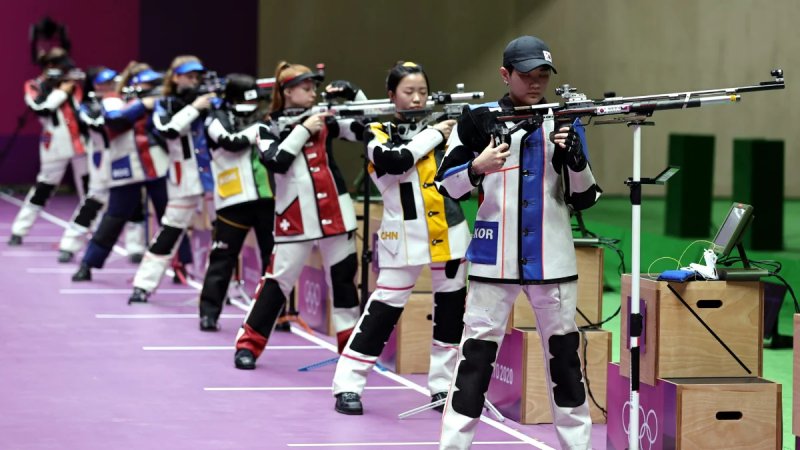 The world has moved from this (a LH BSA Martini International Mk V - super accurate in the prone position):

To this (a System Gemini small-bore rifle): 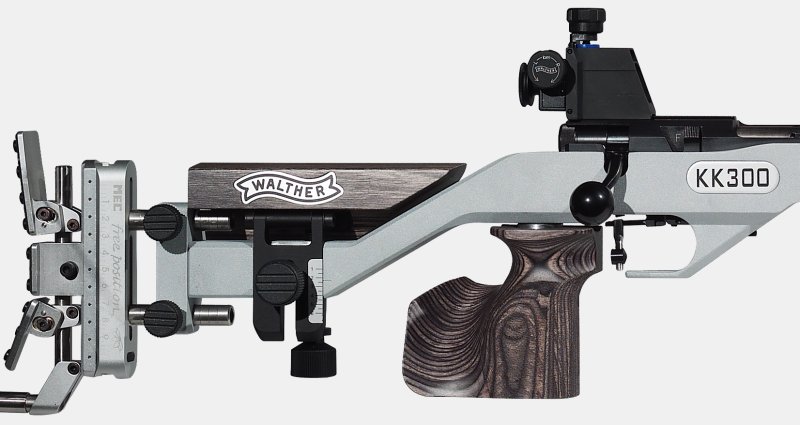 Tradition is always to be respected ("if it works, don't fix it") and a beautiful shotgun is a work of art, but perhaps the time has come for some creative thinking to appeal to a younger market.

Some manufacturers of high-end competition clay shotguns have started to move towards fully adjustable stocks. 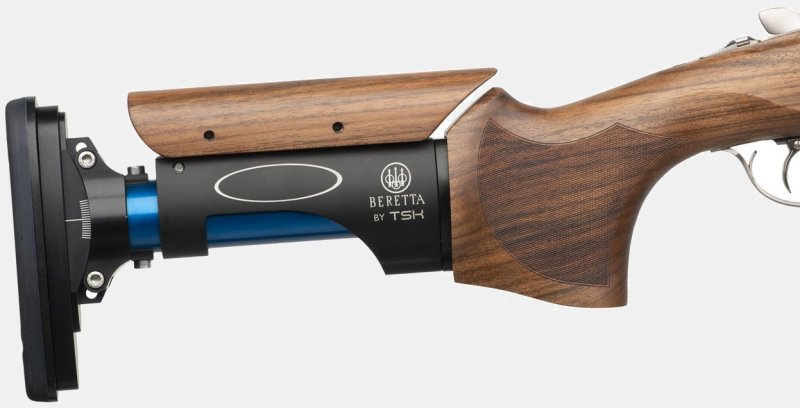 Shotguns may have a single barrel or two barrels which may be "side by side" or "over and under".

Single barrel shotguns may fire one shot before reloading or they may be "semi-automatic" - they automatically load a second cartridge when the first has been used.

Double barrel shotguns fire the first barrel when the trigger is pressed and the second barrel when it is pressed again. The order in which the barrels are fired (top then bottom or bottom then top) is selectable.

Shotguns come in different "calibres" relating to the diameters of the cartridges and barrels.

The Indoor Laser Shotgun (ILS) will be modelled on an over-and-under 12 bore - in the USA this is referred to as a "12ga" - short for "12 gauge". The diagram below shows the parts of such a shotgun.

The external dimensions of ILS barrels are easy to model and can be made as an aluminium extrusion. The barrels will have an OD of 21.5mm and an ID of 16.5mm.

The forend is also straightforward and can be injection moulded or routed from wood.

The action contains the trigger mechanism and electronics. The ILS does not require an external DryFire Universal Gun Assembly because all the parts are inside the action which will be machined from aluminium.

A key feature of a shotgun is its stock - this is the part that enables a shotgun to be configured for different users. Some people have longer arms than others and getting the correct "length of pull", the distance from the shoulder pad to the trigger blade, is a very important part of "gun fit". 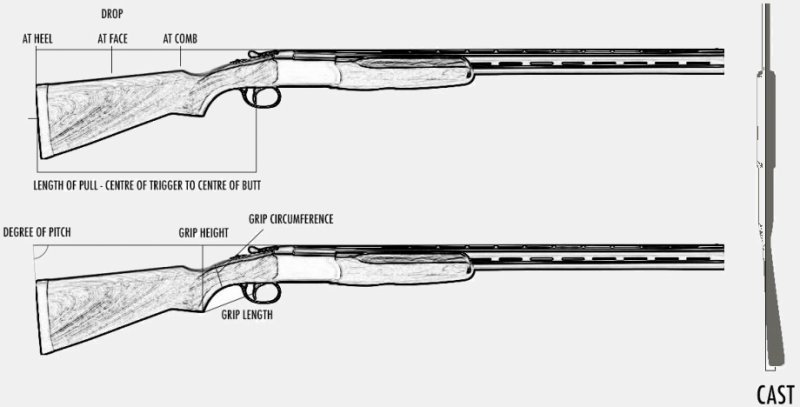 The shooter's trigger hand wraps round the "grip" so the pad of the index finger falls neatly onto the trigger blade. Grips may be "handied" for left or right handed use or they may be ambidextrous.

The ILS requires an ambidextrous grip - either injection moulded or CNC milled from wood. The grip will fit round the aluminum stock that fits to the action and is only long enough for the shooter to have a comfortable grip. 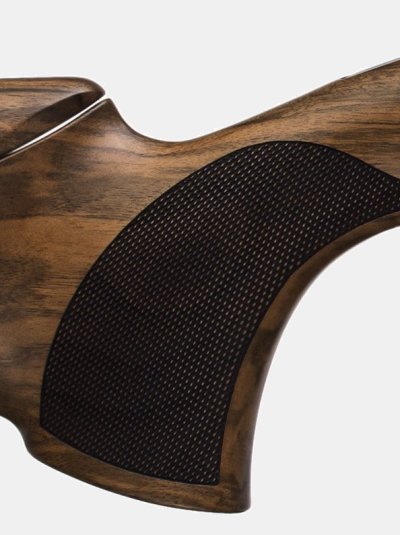 The top of the stock, the "comb", fits neatly into the shooter's cheek (the cheek bone is specifically designed for this purpose!) and its height may be adjusted up/down to bring the shooter's eye level with the barrel rib. The ILS comb will be ambidextrous and either injection moulded or CNC milled from wood.

When looking down on a shotgun the stock is not be aligned with the barrel - it will be offset or "cast" to the right or left so the shooter's eye sits central to the barrel without having to roll the head over. If the junction of the stock and action is symmetrical vertically, cast can be adjusted with a simple angled aluminium or steel shim which can be rotated to give left or right cast.

The butt is not square-on to the rest of the stock, it is pitched at an angle between 5 and 6 degrees. The shoulder pad is often a separate part attached to the butt in such a way that it can be raised up or down and rotated slightly left/right and clockwise/anticlockwise to give the best fit for the shooter.

The sketches below show the building blocks that make up the system.

From left to right:

The ILS stock allows multiple adjustments as well as the addition of counterweights if required.

The sketch below shows:

The video below shows the first prototype trigger mechanism - 3D printed in this case.

UK regulations require at least 51% of the surface area of a replica firearm to be one of the following colours: bright red, bright orange, bright yellow, bright green, bright pink, bright purple or bright blue. 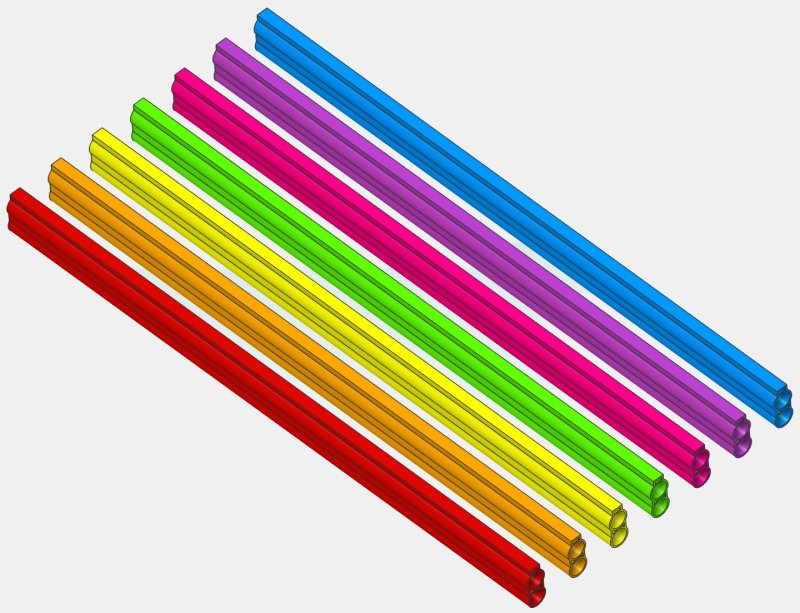