We received this from a DryFire user in South Africa.

Most of us have one eye stronger than the other. Spectacles can partly rectify this and most of the time any difference is not critical.

There are shooting exercises that can encourage a less dominant eye and the Shoot SP stick-on profile helps the weaker eye acquire the correct sight picture.

Many people pick up really bad habits when trying to correct for eye dominance.

Closing one eye is the worst thing you can do because it ruins your peripheral vision, so you may not pick up the second target in doubles, and it can generate muscle twitches that effect your seeing eye.

If one eye is significantly dominant over the other it will be a very serious problem which must be fixed or you will never shoot well.

Take a look at the gizmos below - born out of desperation to overcome eye dominance problems because people honestly believe they can't switch handedness. These things may work but, you have to admit, they lack a certain elegance! (OK, they look horrible.) 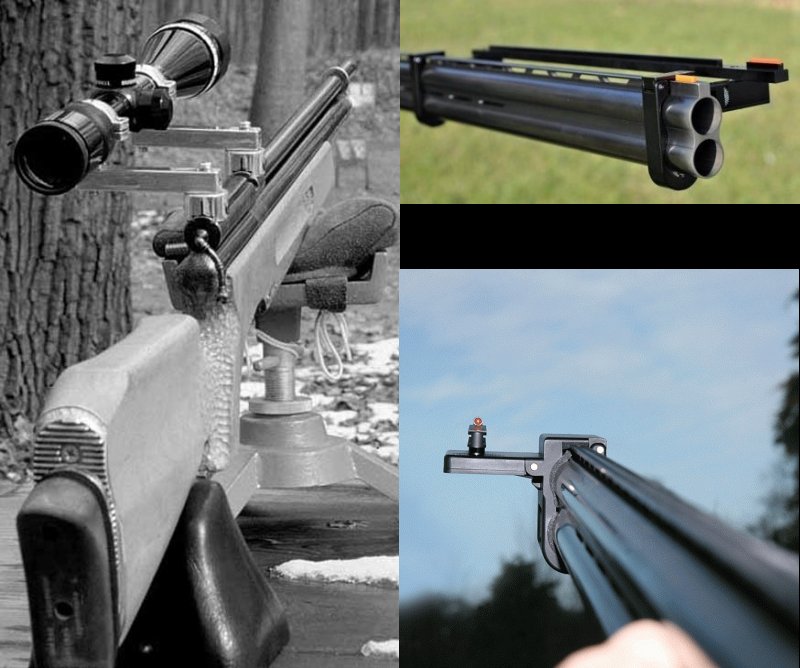 Interestingly, all these gadgets are designed for right-handed people trying to overcome left eye dominance. As well as fixing the dominance problem, by learning to shoot left-handed (see below for how DryFire makes this easy and quick), they will have to change their gun - or at least the stock. Find an off-the-shelf left-handed stock or speak to a gun fitter about having a stock made that is "cast" for a left hander. Better still, take the opportunity to sell your gun and buy a new one - we all like a shiny new gun!

"I'm right-handed, I can't do anything left-handed"

This may be true if you have a physical disability but it is certainly not true otherwise.

Mike Lake, the inventor of DryFire, is strongly right-handed but with a very dominant left eye. At the age of 10 he persuaded his uncle to carve the stock of an air rifle so he could get his left eye behind the sights!

At the age of 14 he started to shoot .22LR, .410 and full bore .303 - and no one was willing to do a hatchet job on their stocks! So, he switched to shooting left-handed and now automatically picks up a gun to shoot that way - trying to shoot right-handed now feels "weird".

The strange thing is watching him after he has shot. Everything is normal to start with, as for a genuine left handed shooter, the gun comes up into the left shoulder and the cheek goes down ready to shoot. After the shot things are different: the gun comes down, crosses the body to the right side and is then opened, unloaded and reloaded as for a right handed person. It takes all sorts!

At first sight switching handedness seems to be a big job - and scores will definitely suffer. This frustrates people, they give up and start looking for gizmos to solve the problem for them - coloured plastic beads, offset sights, special stocks.

This is where DryFire really shines.

Shooting outdoors can take months to feel comfortable shooting with the "wrong" hand. Doing it with DryFire can take a few days - if you are willing to spend the time to shoot a few hundred targets.