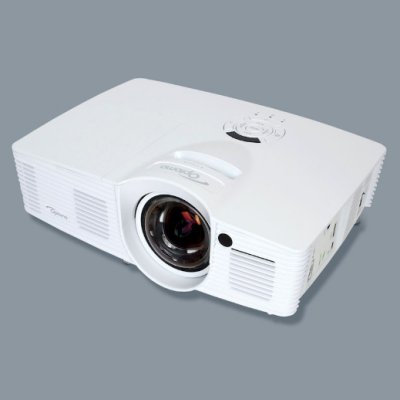 All DryFire system can generate targets as laser dots. With the Projection software add-on targets can be seen as images of clays, changing size and orientation as they move along their trajectory.

The Projection add-on works with a PC data projector (not supplied by Wordcraft.)

With Projection, instead of shooting at a moving laser dot you will be shooting at a projected image of a clay against a realistic background. You will also be able to see the aiming point, allowing for lead, at every point during the flight of the clay. (Yes, we know it's not "aiming point", we don't "aim" in clay shooting, it's the point where your gun barrel should be pointing when you shoot. Your gun movement technique should have brought you to that point when you press the trigger.)

Click to play the video below and at 25 seconds in you will see the clays as they appear on the projection screen in front of you.

Projection is also superb with the optional Rifle & Pistol add-on. You get to shoot at realistic static and moving targets against a realistic background.

The Projection software add-on is included with the complete DryFire Version 5 Projection system.

Projection is available as an optional add-on for those with the laser version of DryFire (Version 5 only).

The projection add-on displays background images on the wall or screen and offers the option of displaying computer generated targets rather than the laser ones normally used by DryFire.

Most PC projectors operate some distance from a wall or screen (like a film projector) and this makes them unsuitable for use with DryFire - because standing in front of the projector casts a shadow on the wall. When ceiling mounted they can be used with DryFire - as long as you don't cast a shadow.

The latest generation of projectors are "short throw" - they can project an image when they are almost up against the wall and you can stand behind the projector instead of in front of it.