DryFire: how it works

With DryFire you practise with your own gun, not a toy gun or replica.

DryFire is "wire free" (*). There are no wires connecting you or your gun to the PC - this allows you total freedom of gun movement and you can put your gun down anywhere with no fear of tripping over dangling wires.

*: actually DryFire isn't totally wire free - there is a short wire from the trigger switch to the Universal Gun Assembly (UGA)..

That is the most important thing to understand:

DryFire displays the target as seen by you on the stand you selected.

Sorry, this is a (short) lecture - but bear with us because the key to understanding why DryFre works is to understand that clay and game shooting is all about angles.

How many times do your hear a newcomer say:

"How far ahead should I shoot, one foot, two feet - whatever?"

Your answer is probably a variation of:

Actually it depends on lots of things: distance to the clay, speed of the clay, direction the clay is moving, type of cartridge, size and muzzle velocity of the pellets, which way the wind is blowing etc.

In reality this is what happens (assuming the gun is pre-mounted):

Your hold point, where you wait to acquire the clay, is at an angle left/right of your straight ahead position.

You swing through an angle before you fire.

Your muzzle will be pointing a certain angle ahead/above the clay in order to hit it.

This explains why DryFire works, indoors, when you are only a few feet from the wall.

The big difference is the feedback you get with DryFire - you know, to the nearest few millimetres or fractions of an inch, where the centre of your shot pattern went in relation to the target.

DryFire treats your wall as if it was transparent and you were looking through it at a real clay layout. The best way to explain this is to show an imaginary shooting stand and a crossing target.

The animation demonstrates how a target trajectory fits on the wall (Note: the wall shown is for illustration only - DryFire does not show an image of a wall on the PC screen.)

The wall represents your field of view - as seen from your eyes in the last frame of the animation above.

DryFire shows the complete trajectory of most targets, from trap to ground, because you are fairly close to the wall. In all cases, your gun movement and angle of swing will always be exactly the same as outdoors - that's why DryFire is so accurate and so useful in building eye/muscle coordination - you do the same thing indoors as you do outdoors. 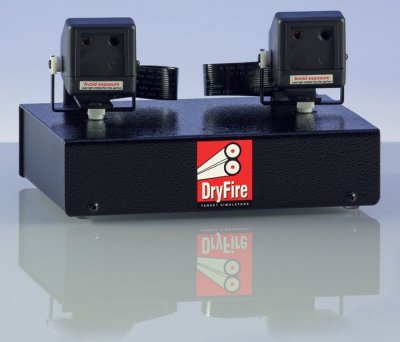 The job of the simulator is to generate the target (when using laser targets) and to see when and where you fired.

The simulator has two heads to enable it to provide doubles targets and it is connected to the PC with a USB cable. It is powered by an external plug-in power supply. 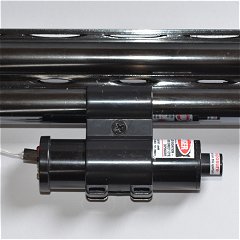 There is no point practising with a toy or fake gun - you need to use the same gun inside as you do outside.

The trigger switch which comes with the UGA wraps around the trigger blade (like a tree tie) and connects to the UGA by a short cable. A shot is fired by lightly pressing the switch - setting your trigger to "Safe" helps provide resistance when you press the switch.

The UGA is clipped to your barrel and contains an infra-red laser which is invisible to the human eye. It also contains a motion sensor for use with the optional Gun Motion add-on.

The UGA switches the laser on to send out a short pulse (about 1/30th second) of invisible laser light when you press the trigger.

The camera(s) on the simulator detect the spot of laser light bounced off the wall/screen.

The rest is just sums, sums to make your brain hurt, really hard sums, sums so hard you wouldn't believe how hard they are! Don't panic - the software does the sums.

The result: instant feedback of where your shot cloud went relative to the clay.

To be sure that each target is exactly the same as the real thing DryFire takes into account variables such as:

DryFire also takes into account other variables such as:

If you have a sharp-eyed instructor, and the sky is right, he can call the position of your shot pattern. DryFire does this for you - on every shot. It shows you the exact shot pattern (depending on choke, cartridge and distance) relative to the clay.

With DryFire you get detailed feedback every time - hit or miss. It tells you exactly how far you were above, below, ahead, behind the clay - to the nearest centimeter.

The short video below show the selection of a Double Rise layout then shooting from stand 3.

Normally DryFire steps through the targets in sequence, like shooting a round outdoors, but "Repeat target" allows a single target to be practised on its own.

Target trajectories are shown as dotted lines when a stand is selected - though they are not normally shown on the wall/screen when you are shooting - that would be cheating!

However, dragging the progress bar above the score card allows you to see the trajectory, the location of the clay, and the best aim point (the small cross), at any time during its flight. Of course, we don't "aim" at clays so the "aim point" is where the barrel of your gun needs to be pointing to allow the correct amount of lead.

In this case both targets were hit and you can see the shot pattern relative to the clay and enlarged sections providing more details about the exact location of each shot.

The example below shows two different shots taken from stand 3 during a Double Rise simulation. Note: the screen was reduced so the image would fit on this web page. 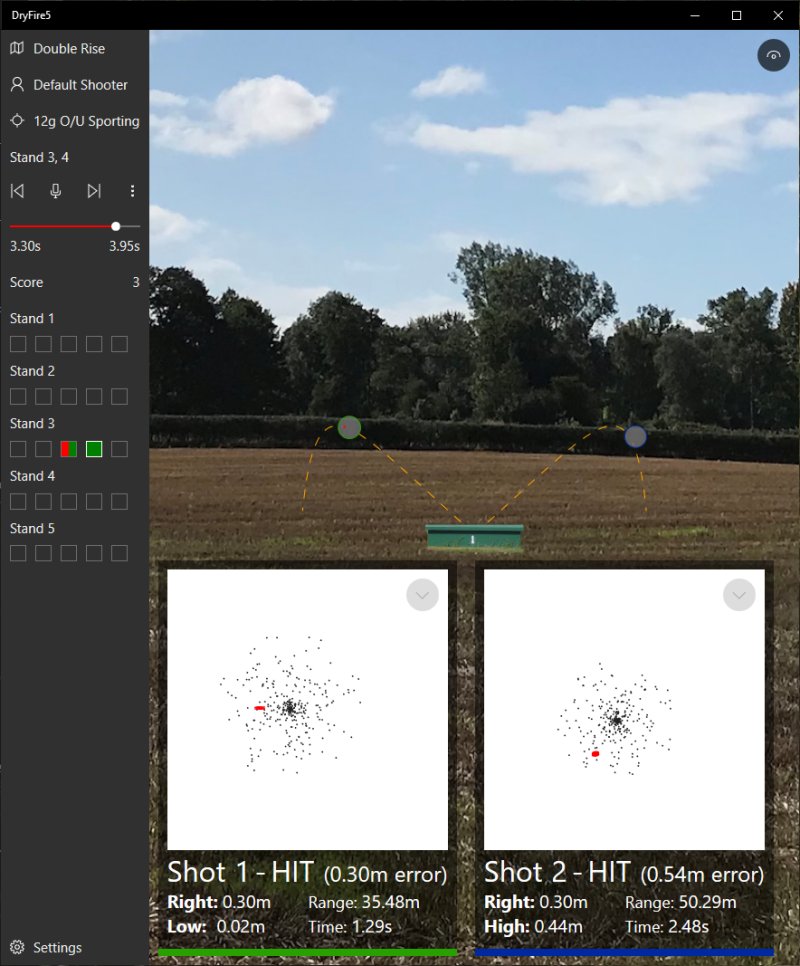 What the numbers mean 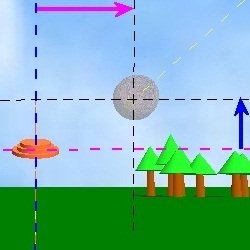 This is a trap target (orange clay) rising directly in front of the shooter and going straight away.

The dashed blue line shows the direction the clay is travelling at the point when the shot cloud (the grey blob) is closest to it.

The second distance reported by DryFire is always one perpendicular to the first one - as shown by the magenta line.

DryFire has reported that the centre of the shot pattern is 0.42m ahead of the clay (since the clay is rising) and 0.83m to the right. 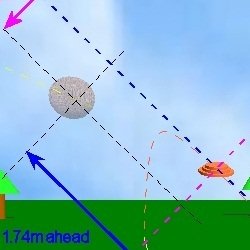 In this case the clay is rising and travelling towards the left. The direction of the clay's travel, at the point when the shot cloud is closest to it, is shown by the dashed blue line.

The magenta line is perpendicular to the direction of travel of the clay.

DryFire has reported that the centre of the shot pattern is 1.74m ahead of the clay (since the clay is rising) and 0.41m below - i.e. below the direction of travel.